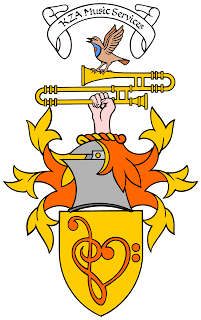 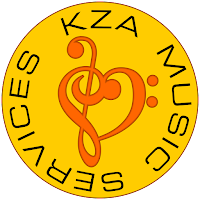 The Bloxham-Simms Association have had a coat of arms designed by Messrs Brian Ashier & Elliot Nesterman and has been duly registered with the International Society of Commoners Heraldry.

The Association consists namely of the descendants of Frank Henry Simms and wife Amanda Matilda Eliassen both of Hull. Franks was the only child of Francis Alfred Bloxham & Charlotte Ann Simms. Frank & Amanda had a large family of 13 children many of whom went on to serve during WW2. Frank & Amanda now have many descendants, many of whom still keep in touch via an online group called the Bloxham-Simms family of Hull.

They celebrated their 50th Wedding anniversary in 1964.Their eldest child was Harry Leonard Simms and his eldest son was Paul Simms who married my mother Christine Frizzell in 1970. Interestingly Paul & Christine Simms celebrate their 50th Wedding anniversary in 2020. I have the curious position of being their eldest child hence I've put this blog together today to highlight the families progression. 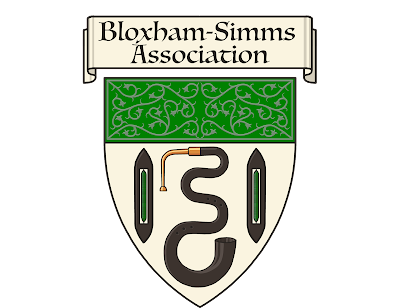 Francis Alfred Bloxham and Charlotte Ann Simms both lived in the same small market town of Shipston-on-Stour situated in South Warwickshire. Shipston was a working Wool Town and Charlotte’s Father William was employed as a Plush Weaver and Francis’s father Alfred worked as a Cordwainer (shoe maker). They were to have only one child Frank Henry Simms born in 1892 and he was moved ‘up North’ to be brought up by his Uncle George & Auntie Ann in Hull.

My thanks to Brian Abshier of Texas for creating this wonderful armorial which tells part of my families history. 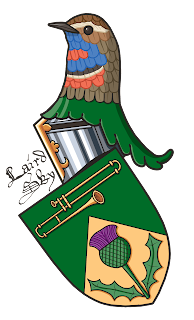 I'm rather delighted with this new interpretation of my South African arms by the Texan based artist Brian Abshier. This particular style of rendering is called the Bellenville style of which I know very little about other than it is a style from the Middle Ages based on a collection referred to as the Bellenville armorial. I very much like how my crest Bluethroat merges into the mantling on the great helm. The artist has really captured the sackbut proper in the chief and nice to see such wonderful detail in the crest.

A few years ago I employed the rather eccentric Mr Ljubodrag Grujic, a Serbian school teacher by trade but a keen and popular international heraldist. I'm sure he'd described me as his most troublesome client and I would equally regard Mr Grujic as one of the most eccentric artist I've yet employed but none the less the emblazons exist and I figured why not show them to the world wide web. 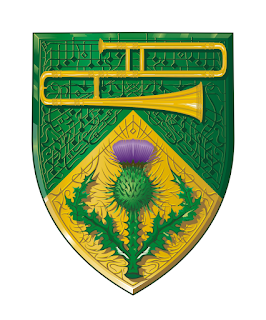 The shield as shown above is interestingly done. It features a sackbut (an early forerunner of the modern trombone) upon a green shield partitioned by a chevron gold which upon is placed a decorative thistle proper. 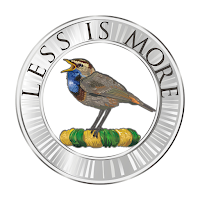 The badge is a variant of my official crest badge and features my birdie crest, a 'bluethroat' latin name 'Luscinia svecica'. A small passerine  European bird not an easy bird to find in the UK but very occasionally they make it to my back garden. 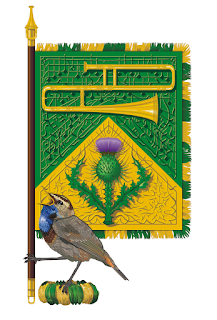 My banner of arms held aloft by my crest. I rather like the finial shaped as a sackbut. The fringe gives the flag a charming appearance. I fly a similar one in my garden. So these are my Serbian emblazons as i like to call them :-)

The Scottish Register of Tartans

I've registered my own personal tartan. The inspiration for such was my great granda Hugh Frizzell of Greenock, Scotland, a truly grand character who led a full and fascinating life. Orphaned as a youngster at the turn of the 19th century and packed off to Canada as a Quarrier Orphan, he made his way hame to Scotland and married Christina Sutherland in 1904 and then went onto serve during the Great War with the Argyll & Sutherland Highlanders, Great Granda Hugh got shot in Egypt and was redeployed to the Rail & Water section of the Royal Engineers back hame again in Scotland at Fort Matilda Greenock  and Paisley.  Granda Hugh Frizzell had 13 children of which 10 survived to adulthood. He worked  as a railway carter and then despite failing health offered his services again  during WW2 as a Civil Defence Warden which basically did him in. He died in 1944 from failing health and serving in inclement weather he succumbed to a cerebral haemorrhage. The Home Office kindly sent me his Defence Medal retrospectively for his services rendered which I thought was a very kind gesture bringing Hugh's award up to 3 medals in total. 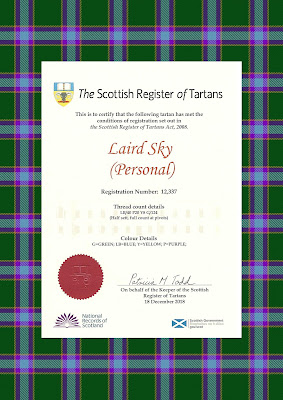 The colour scheme for my tartan was inspired by my South African Letters Patent issued back in 2015, namely my coat of arms. It's a simple design but is permitted for any Frizzell descendant of Hugh Frizzell to use plus my Bloxham-Simms family of Hull. The design was created on the 11th November 2018 a fitting tribute on the centennial of the Great War. You can see the official registration details here- Laird Sky Tartan

Posted by TenorClef at 14:43 No comments:

Letters Patent or Certificates of Registration?

I have a few coats of arms issued by the South African Government, I’ve generally referred to the actual physical document as Letters Patent and not a Grant of Arms. A grant is seen as having been issued with some form of Royal Warrant attached to it as opposed to being issued officially by a government. Recently I had some criticism from another South African armiger stating that the arms issued by South Africa were not Letters Patent but merely Certificates of Registration. This gave me pause to think and when I asked the person who stated the above, they decided to reply with a flippant remark if that I couldn’t see the difference then clearly, they couldn’t explain it. So, what are Letters Patent? A quick glance online gives several definitions but for the sake of brevity I will refer to the online dictionary.com which says ‘an open document issued by a monarch or government conferring a patent or other right.’ (sic).

So the coats of arms issued by the Bureau of Heraldry, are they an open public document? Yes. Are they issued officially by their Government? Yes. Do they confer the right of ownership for a coat of arms? Yes! So why do they refer to their coats of arms as Certificate of Registration? In order to clarify this, I had to ask the Deputy Director of the Bureau of Heraldry directly. What follows is an extract exactly as stated by Mr Marcel van Rossum OMBB-

The College of Arms issues “letters patent” the Bureau of Heraldry issues “certificates of registration”. For all intents and purposes it’s the same thing. The College of Arms “grants” in the name of the monarch and in South Africa under the Heraldry Act (1962) the certificate is “issued”. In both cases the heraldic representation so issued and recorded affords the applicant sole ownership of the unique design.

So, there we have it, to all intents and purpose they are the same thing but different only in the language of usage. To illustrate in England law enforcement officers are referred to as Constables and in Ireland as Gardas. Here in the explanation of language we discover that indeed it is reasonable to see arms issued by the South African Government known locally as 'Certificates of Registration' to be referred more commonly in other parts of the world as 'Letters Patent'.
Posted by TenorClef at 12:45 No comments: