I thought today I would talk a little bit about my registrations with the South African Government. Curiously South Africa has a policy whereby both nationals and foreigners can approach their heraldry department called the Bureau of Heraldry and pay for the design and registration of armorial ensigns. The certificates are hand painted and the calligraphy is hand applied (no computer font/print). Making each registration certificate or Letter Patent from the Government a veritable work of art. My particular registrations consist of firstly a coat of arms, secondly a Standard also known as a Heraldic flag,a Heraldic badge and finally a rendition of all three- 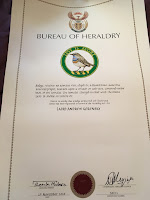 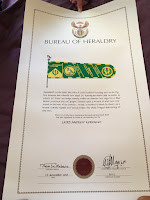 These emblazons are all by the chief heraldic artist of the Bureau of Heraldry Gavin Schlemmer Esq.
I must say I am absolutely delighted with these heraldic achievements and was pleased to see that the UK Government offer protection for my arms under the IPO department. 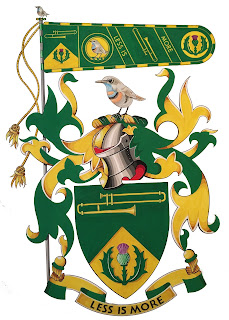 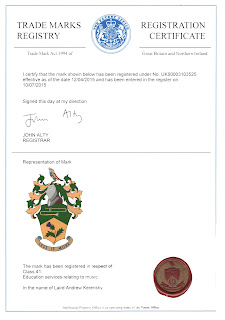 The sackbut reflects his principal instrument, the tenor trombone. The thistle is symbolic of the armiger’s Gaelic & Scandinavian roots. Both his grandfather George and great grandfather Hugh are from Greenock, Scotland and served in the army during the first and second world wars. One pair of his great, great grandparents, Elias a mariner and his wife Matilde, were originally from Sweden and Norway respectively but moved to Hull, England in the 1850’s. Curiously the armiger’s South African connection is supplied by his great, great grandfather John Thomas of Middlesbrough who served as a career soldier for Queen Victoria and King Edward in South Africa during the Boer War and received the QSA & KSA campaign medals.The Crest, the male Bluethroat has a varied and imitative song; a pun on the armiger’s profession.The Motto, Less is More, reflects the armiger’s interest in minimalism.