The Simms family of Hull part 2 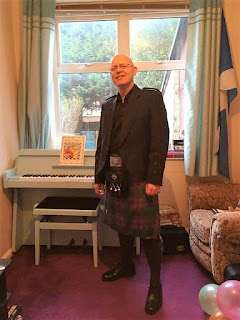 So today I was able to finally get some conclusive proof about my paternal origins and answer some questions about the Simms family of Hull. Having taken the ancestry DNA test a few weeks ago they provided some fascinating insights into understanding a bit more about my great grandparents Frank Henry Simms and Matilda Amanda Eliassen. 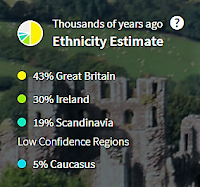 From my DNA result I could ascertain that i am carrying the Scandinavian markers of my great grand mother Amanda Matilda Eliassen. Her parents Elias & Matilde were from Sweden & Norway and came to England in the 1850's. My genetic markers were actually very specific to East Norway. The 30% Irish is due to my mother's family being Frizzell. Hugh Frizzell my great grandfather as we have already established his father James Frizzell was from Ireland. The 43% being from Great Britain is mainly the Simms & Bloxham lineage which are very old family lines. I have especially to thank cousin  Mark Hunter for bringing this to light and David Bloxham for finding the genetic DNA markers which confirm the Bloxham line.

So it would indeed appear that my paternal great great grandparents are indeed Charlotte Simms & Francis A Bloxham. David Bloxham (distant cousin) was kind enough to throw up this DNA table which shows that although we spring from different Bloxham lines we shared the same ancestor John Bloxham 1770-1842. 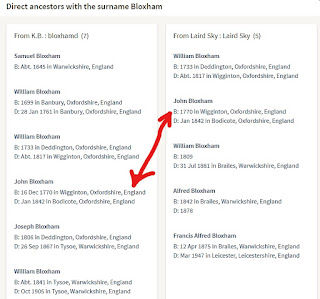 Finally nice to see how the Simms/Bloxham family fits into the full genealogical picture of my family. Irish, Scandinavian DNA might explain the red hair, blues eyes and obvious deep English roots. 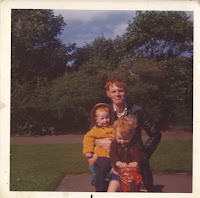 Posted by TenorClef at 13:37 No comments:

The Simms family of Hull part 1 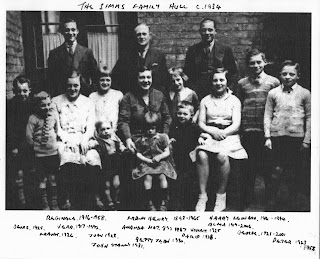 So i'm now researching my paternal origins. The above photo shows  my paternal roots. This photo taken in Hull circa 1934 shows my great grandfather Frank Henry Simms centre back row and to his right my grandfather Harry Leonard Simms. Frank Henry Simms & his wife Amanda Matilda Eliassen married in 1914 and as you can see 20 years later they were the parents of 13 children. Although large families were the norm back then theirs still appears to be larger than normal as can be seen from this article taken from the Hull Daily Mail April 2nd, 1945 p.3

Clear the family as a whole committed themselves to the war effort during the difficult period of world war two. I note my grandfather who was their  eldest child Harry Leonard Simms born in 1914 was working in an aircraft factory in 1945. Several of his siblings were in service during the war......it would be interesting to do further research with the MoD regarding what my granduncles & Aunts did during the war.

Interestingly Frank Henry Simms was born in Brailes in 1892, the son of Charlotte Simms my great great grandmother. On his birth certificate there is no father listed which did mean for decades there was no way of researching our paternal lineage.

Thankfully a distant cousin Mark has been able to shed some light on this closed area. It does now appear that the father is likely Frank Bloxham and to shed some light on this i have gone ahead with a DNA test with ancestry.co.uk to discover if this is the case. Results to be provided once they are available but as Mark has pointed out it seems very unlikely Charlotte Simms would have brought an Affiliation Case against Frank Bloxham if this was not the case. Attached is the news paper article that shows her case against Mr Frank Bloxham. 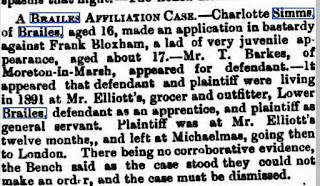 To be continued...
Posted by TenorClef at 14:04 No comments: